Crop wild relatives and the importance of diversity

On the face of it, the predictable environments and crop monocultures used in the standard industrial agricultural model make sense. By removing most sources of variability, consistently high yields can be obtained, which is economically sensible in the short-term. However, over the years flaws in this model have been highlighted time and again. A classic early example is the Irish potato famine of 1845-49. Due to the monoculture nature and lack of diversity of the potatoes being grown at that time, when the plant disease ‘blight’ (Phytophthora infestans) hit, it devastated the crop and in turn devastated the Irish population and economy. 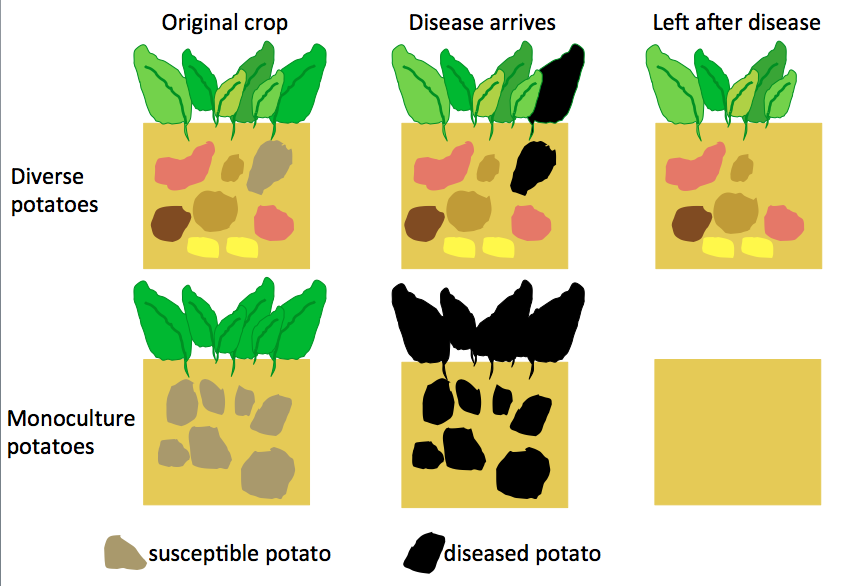 Even though access to the thousands of potato varieties that exist wouldn’t have been there for the Irish, a more diverse range of potatoes could have helped as some may have been resistant to the disease. The lesson from cases like this is that diversity in our crops is important. However, this diversity can be difficult to maintain in agriculture and therefore people are looking to relatives of crops that live in the wild. 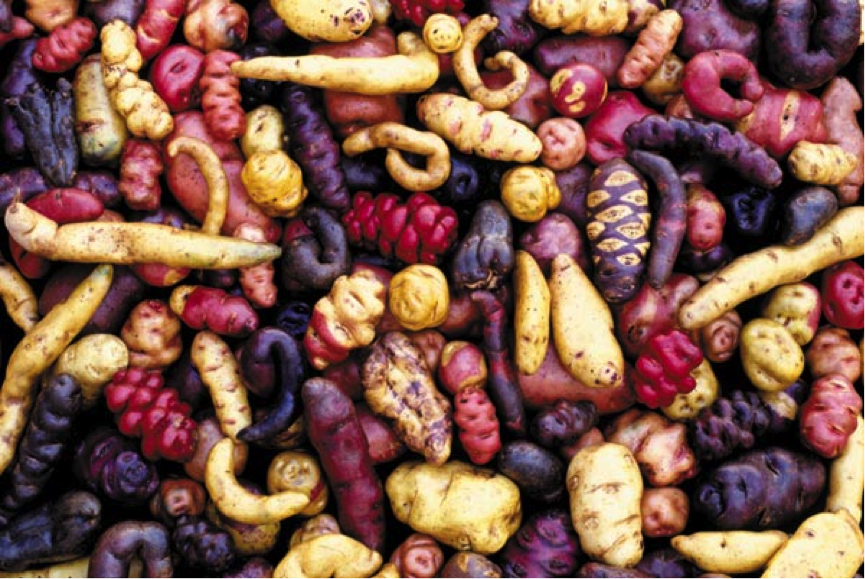 There are at least 4,000 varieties of potatoes in the South American Andes1.

Crop wild relatives are wild plants that are genetically related to a domesticated crop2. Typically the wild relative will be an ancestor of the crop plant that it is closely related to. The process of breeding and maintaining elite crop lines can lead to a reduction in genetic diversity and an unintended loss of potentially beneficial traits compared to crop wild relatives due to smaller population sizes and a lack of gene flow between lines. When abiotic (e.g. extreme weather events) and biotic (e.g. pesticide resistance) factors are unable to be controlled, crop plants may uniformly struggle to survive. Crop wild relatives can provide genetic resources in the form of general genetic diversity and adaptive alleles for desired traits, which may be essential for the future of food security.

In order to discover what genetic resources are available in the wild for Brassicas, wild populations of Brassica oleracea are going to be investigated. The focal populations are along the north coast of Spain and the southwest coast of the UK. It is general consensus that these populations were founded by plants that escaped from domestic circumstances (i.e. allotments, gardens or agriculture)3,4. Whatever the origin of these wild populations, they have been around for a long time, experiencing natural environmental conditions and survived. Therefore it is likely important traits for survival will be present. In addition to the genetic diversity in the plants themselves, the rhizosphere microbial diversity and glucosinolates profiles will be explored. It will then be possible to compare these results with those from the different varieties growing here in Glasgow. Overall, this information will increase our understanding of the ecological relationships between the rhizosphere microbial communities and Brassicas, and may lead to new ways to improve the nutritional value and survival of brassica crop plants. 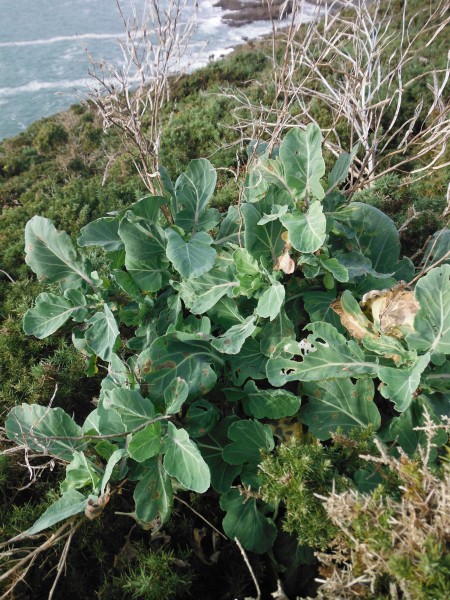 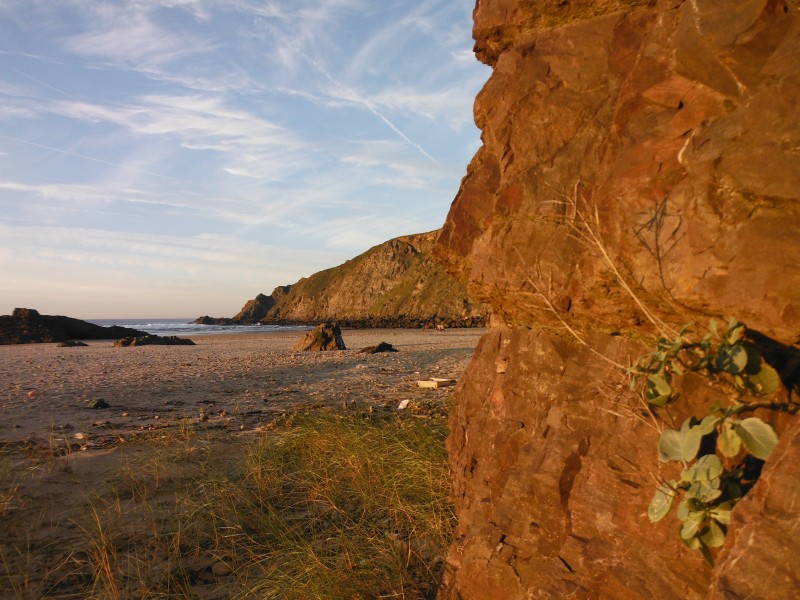 Plants are rooted to the spot. When a passing predator (e.g. herbivore) fancies a nibble, a plant cannot run away or hide. However, they do have a form of biochemical defence known as plant secondary metabolites. These are compounds a plant produces that can taste bad, be hallucinogenic, or even very toxic when consumed. Many of our pharmaceuticals (e.g. codeine, taxol and colchicine) and recreational drugs (e.g. nicotine, cocaine and cannaboids) are based on plant secondary metabolites.

In Brassicas (the focal plant genus of this blog) an important group of secondary metabolites is the glucosinolates. This is a large group of sulphur-rich compounds, with approximately 120 different types described, and each Brassica species producing 30-40 of them. Glucosinolates are stored in vacuoles in cells, which separates them from the enzymes that catalyse their breakdown, myrosinases. When plant tissues are damaged, for example when a herbivore eats part of a plant, glucosinolate molecules encounter myrosinases and a range of breakdown products are created.

Although, glucosinoaltes are associated with plant defence, some of their breakdown products have been shown to have positive associations with human health1, one reason for the recent rise in popularity of cruciferous vegetables. For example, broccoli and kale have high concentrations of glucoraphanin. This is the precursor to sulforaphane, a phytochemical linked to anti-carcinogenic properties. A downside to glucosinolates in human consumption is the distinctive bitter taste they give cruciferous vegetables, which some people find unappertizing, although, this taste is loved by others! 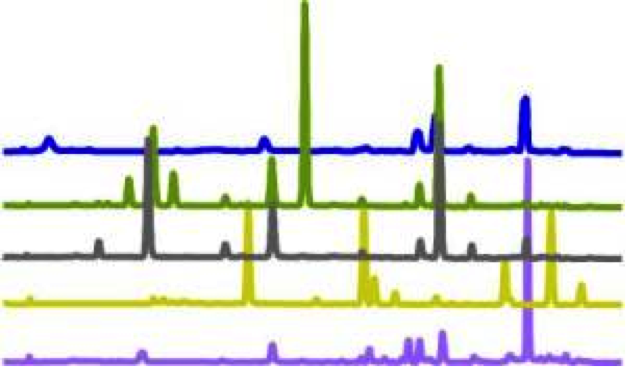 More to SOIL than meets the eye

Soil is often thought of as just dirt: at best not important, at worst filthy and worthless. In reality, soil is an essential part of all our lives. Not only does it provide many ecosystem services—for example water filtration and purification—it is also a vital habitat for organisms from all walks of life, including our crop plants (i.e. food). From the vast collection of organisms supported by soils (e.g., plants, animals, fungi and bacteria), microorganisms dominate soil communities. However, we can neither see these without a microscope, nor grow most of them in the lab (the ‘great plate count anomaly’1).

Modern techniques such as metagenomics can be used to dramatically increase our understanding of microbial communities via study of their genomes. This technique involves extracting all of the genetic material from a sample, sequencing it and identifying microbial species and/or groups, thereby allowing communities to be viewed without growing them in a laboratory. Recently metagenomics has been used to visualise microbial communities in the human gut, which has led to a string of articles both in scientific journals and mainstream media. Below is an example from Nature (http://www.nature.com/nature/journal/v489/n7415/abs/nature11550.html), where a ‘tree’ has been used to show how closely related all the different species found are to each other. 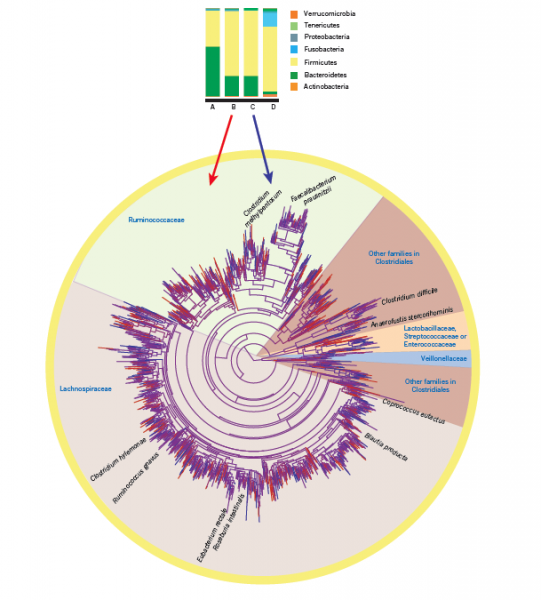 From this research associations between particular characteristics of human gut microbial communities and health are beginning to be made (e.g., a recent article on the BBC shown below; http://www.bbc.co.uk/news/health-34732160). The same associations are being found in plants, where roots and the few millimetres of soil surrounding them (the rhizosphere) have a function comparable to our guts. In plants, the soil microbial communities associated with roots are essential for plant health and growth as they can enhance plant resource use (improve nutrition) and provide protection against pathogens. 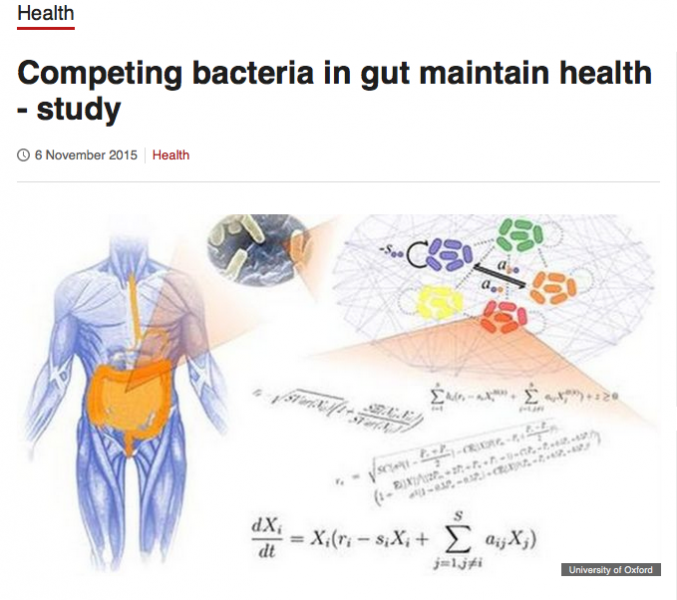 In fact, plants can influence the microorganisms that associate with their roots. They often secrete up to 40% of the photosynthates (compounds created by energy from photosynthesis) they produce into the rhizosphere2. Depending on what compounds are released, the population density of different carbon starved soil microorganisms are higher in the rhizosphere compared to the surrounding soil – the ‘rhizosphere effect’.

At the beginning of May, three weeks before plants were either planted out or into bigger pots in the glasshouse, soil samples were sent for analysis at the James Hutton Institute in Aberdeen. Analyses will be conducted on the soil structure (bulk density and particle size distribution), the soil composition (elemental analyses: N, P, K, pH and organic matter content) and the microbial archive (the pool of species already in the soil).

In June soil samples were taken from the rhizosphere of plants being grown both outside and in the glasshouse. We are analysing these samples to see if there are similarities in the microbial rhizosphere communities associated with our plants between the different groups. For example, each species may have a microbial community “signature”; i.e. microbial communities associated with plants of Brassica napus may be more similar to each other when compared to those associated with plants of B. oleracea and B. rapa. One possible reason for this is the variation in ploidy level (see the ‘Triangle of U’ in the previous post). This could lead to differences not only in the compounds being released into the soil by the plants, but also to differences in the quantity of these compounds due to increased gene copies in the allotetraploid B. napus. Along the same lines, plants outside may be associated with a greater diversity of microbial species compared to those plants remaining in the glasshouse due to a greater input from the environment.

These are all results to look forward to in the New Year!

Our plants have been developing rapidly, helped along by the recent warm sunny weather! True leaves are already appearing on most of the B. rapa and B. napus seedlings. These are the first set of leaves that actively photosynthesise. Typically they are the third leaf to appear and will develop in the shape expected to be seen on the adult plant. The edges of these leaves are covered in hairs. In the different varieties of B. oleracea only a few true leaves are showing and no hairs can be seen. 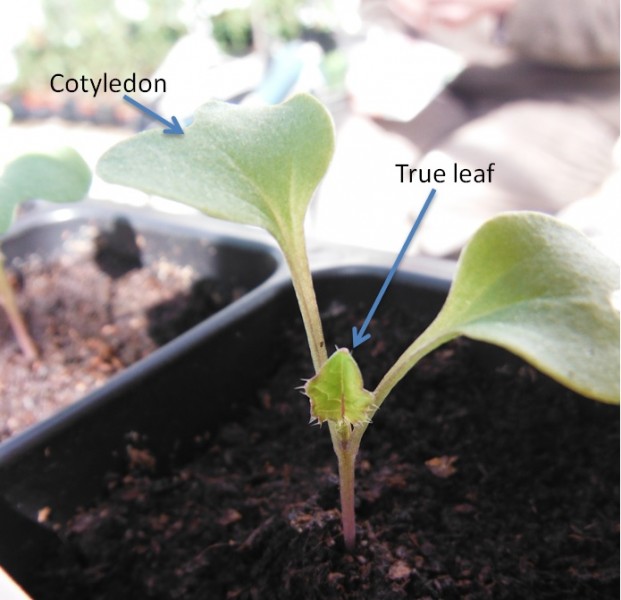 A seedling Purple Pak Choi (B. rapa) with the different leaves indicated. The hairs that are present on true leaves of B. rapa and B. napus varieties are clearly visible.

What is the relationship between these species?

B. rapa and B. oleracea are the diploid parental species of the allotetraploid hybrid B. napus. ‘Ploid’ refers to the number of copies of a DNA sequence found in a species. DNA sequence is organised into chromosomes within cells. Most organisms we know and think about are ‘diploid’; they have two sets of chromosomes. B. napus is known as an allotetraploid, because it has four sets of chromosomes (tetraploid), two of which are from one species and the other two are from another (allo).

The ‘Triangle of U1’ shows the relationships between the main crop species within the Brassica genus. Hybridisation and polyploidisation has occurred multiple times; interspecific reproduction has produced fertile offspring. If we think back to the hair around the edges of the true leaves, B. rapa has hair, but B. oleracea does not. This suggests the hairs found on the allotetraploid B. napus leaves come from the B. rapa genome and not B. oleracea. 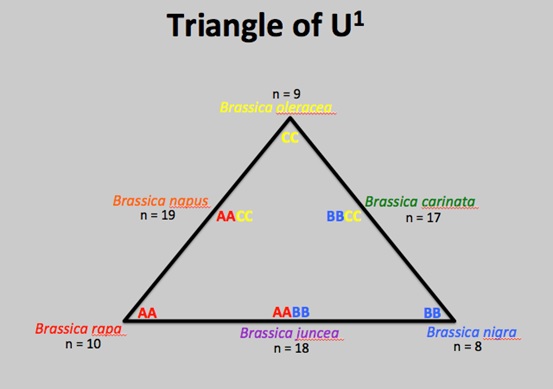 Look out for further updates as we continue through spring.

This blog will follow the progress of Brassicas being grown in the Gardens as part of a collaborative PhD project with the University of Glasgow. The overall goal of the project is to understand how crop plants will respond to environmental changes. The focus is on a major crop in Scotland, oilseed rape (Brassica napus), with several crop species within the Brassica genus being grown: oilseed rape/swedes (B. napus), turnips (B. rapa) and cabbages (B. oleracea).

Food security continues to be an important issue. Many millions of people worldwide go hungry on a daily basis (an estimated 805 million in 2014, World Food Programme, http://www.wfp.org/hunger/stats). Additionally, environmental change is already being seen, including more severe weather events. These changes in climate, combined with population growth, could increase the number of people suffering from food insecurity. Therefore, this project hopes to provide some insights that will contribute to agricultural advancement and knowledge of plant adaptation.

This week seeds were sown and germinated successfully in one of the glasshouses. In about 4-6 weeks, when they are large enough, they will be planted outside in the vegetable garden. 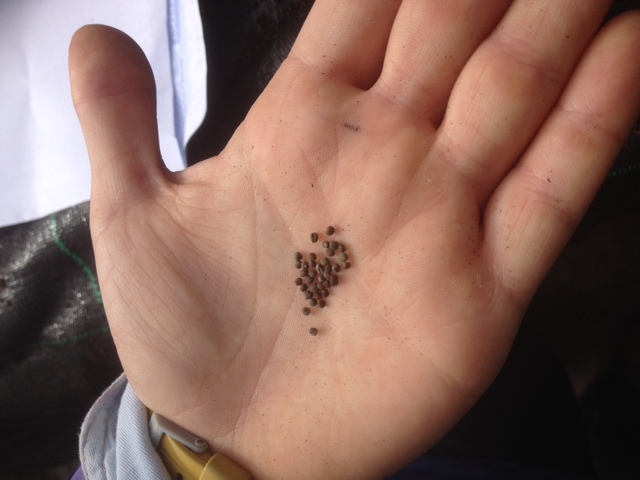 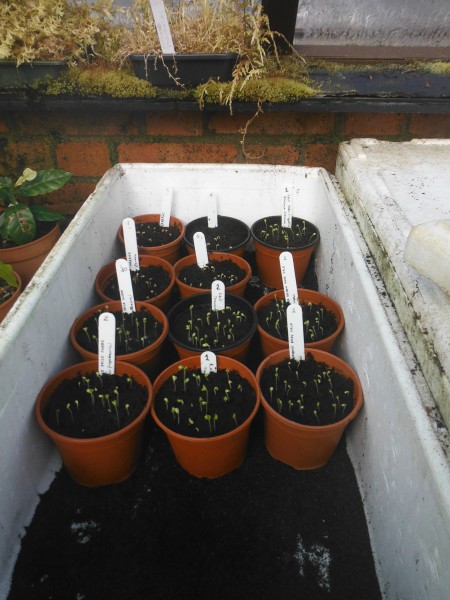 Keep your eye on this blog for more updates and information about the project!